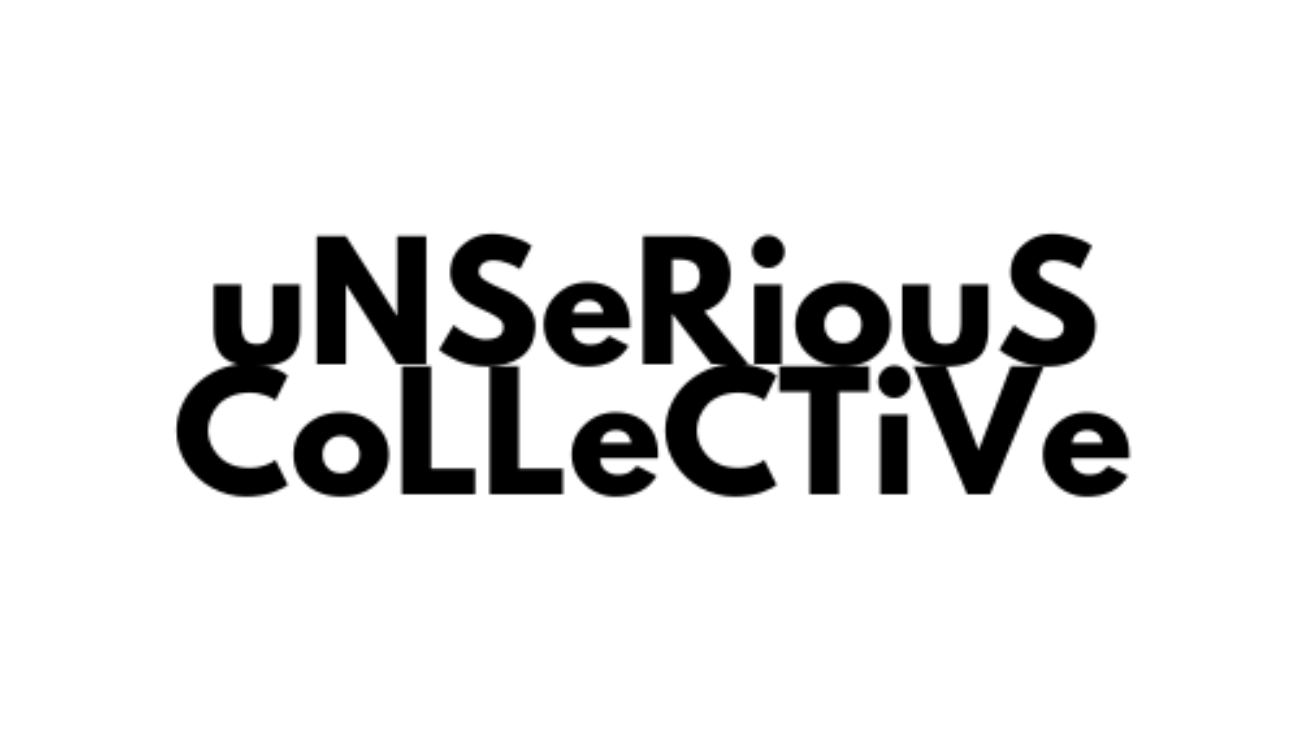 After combing through over 140 submissions from emerging Nigerian poets, reading blind, these 21 poets made our longlist:

Congrats to all longlisted candidates. Per our schedule, the shortlist will be released on August 31, 2022, and Fellows announced on September 5, 2022. 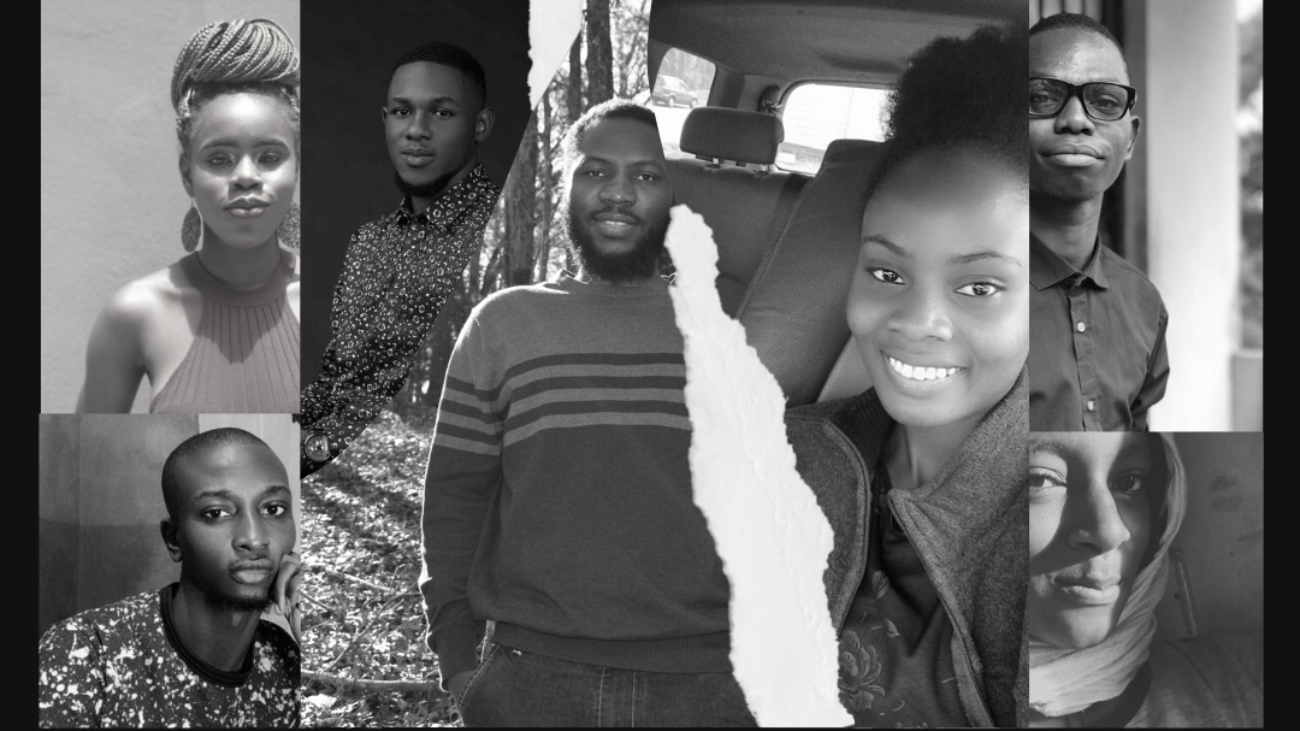 2021 was 2020 in a mask, a ghoul, an affliction-in-progress. Luckily, we had poems to guide, comfort us through the turmoil. The world’s working artists are not trying to help the world go around, but forward, Mary Oliver wrote years ago. We agree. Nigerian poets have developed a culture of excellence that inspires hope for our collective future, renews the inner life.

In no particular order, here are some poems by Nigerian Poets in 2021 that have touched us in different ways, nourished us (all can be found online):

1. Panorama of a Coloured Race by Iheoma Uzomba (Rattle)

What we find amazing, amongst other things, in Iheoma’s poem is the movement—it begins with encounter and ends with disappearance. We’re interested in the irregularity of the lines in the stanzas—its deliberate shuffle; beyond this irregularity, the layers beneath its superficiality—which every poem possesses. Movement as structurality. Movement as meaning-making.

“How many parts were you cleaved into?” Bello inquires. This is a vivid investigation into a body that has undergone damage. The poem’s entirety, from start to finish, dwells on recovery. It opens with words like honey, turmeric, chlorine, and cloves, ingredients for a potion or elixir. Bello’s poem promises you awe, and the cause to heal, of course.

Ahmed’s “Two Poems” in Four Way exudes proverbial and mythical excellence. The poet continues to show us how language can achieve suitable imagery.

Poems do not only act as insulators against woe, but could also be conduits for prophecy. Zach’s poem does both with ease. In their writing, the woe of the homophobic present is tapered, disarmed — at least ideologically — by the confidence of the speaker in the poem. We love that this poem is one of resistance AND joy. The last lines are especially potent: Whether / Nigeria likes it or not, my dear, / we have happened.

5. why do we love the familiar road? by Damilola Omotoyinbo (Agbowó)

Omotoyinbo offers us a poem that, although prayer-like in cadence, turns its back on order and leans on the imagination and possibility embedded in the unknown, which resists being finite. Mind you, the poem does everything but indict those that follow the known (a code-word for the theistic), even if the question appears twice in the poem, as a title and as the final line. If anything, the poem self-indicts as “a fugitive ” and finally embraces the inverse spirituality associated with order. The speaker confesses i am searching for the / unknown, the priest named it god. Overall, the poem does not disturb the silence, to quote Wendell Berry, the silence from which it came. Such a beauty.

The opening of Ameen’s poem is so powerful and calling. The poem is layered and it is so wonderful that such a tender poem can be as daunting as possible.

The poetics of places serenade Romeo’s recent offerings. In “Cotonou,” he invites the readers into the city, and with metaphors that hold space and gravity, he points towards vivid descriptions. The poem, in each of its four parts, carries the small things of existence very heavily. It’s not a shock that Romeo’s poems mirror living and migration in the ways that they do.

8. Ode to the Lust for Life by Anthony Okpunor (Poetry Column-NND)

Reminiscent of American singer Lana Del Rey’s masterpiece, “Lust for Life,” Okpunor “writes about the day as what endures the night.” His is a fine addition to the list of remarkable confessional poems written by Nigerians. Okpunor’s language is, well, an act of splendor.

First, We have to note that: We were fascinated by how Adenike executed the lines in these poems—the unspoken yet loud deliberateness and craftiness behind all of them. One of the strengths of these poems is the fact that they guide us into their own worlds, boldly teach us the ways in which they should/could be read. From the syntax, to the lineation, to the punctuation, to the spacing—it is like the gasp that escapes one’s mouth when they come upon an object of magnificence, a surprise and a fascination, because in that brief moment they’ve come upon an object that alters their knowledge/experience of a particular thing as they know it, albeit beautifully. Adenike does that with her poems.

If there’s anything we know about Nigerian poets, it’s the lushness of their poetic language. Damian’s poem rings with lines like this one: this absence / this longing / so humble / i strew them like sunlight into my prayers. That is magical, otherworldly composition right there. Much has been written about desire — its delicate contradictions — and this poem is a worthy addition to that tradition of beauty, especially as it also disrupts heteronormativity in the Nigerian cannon. 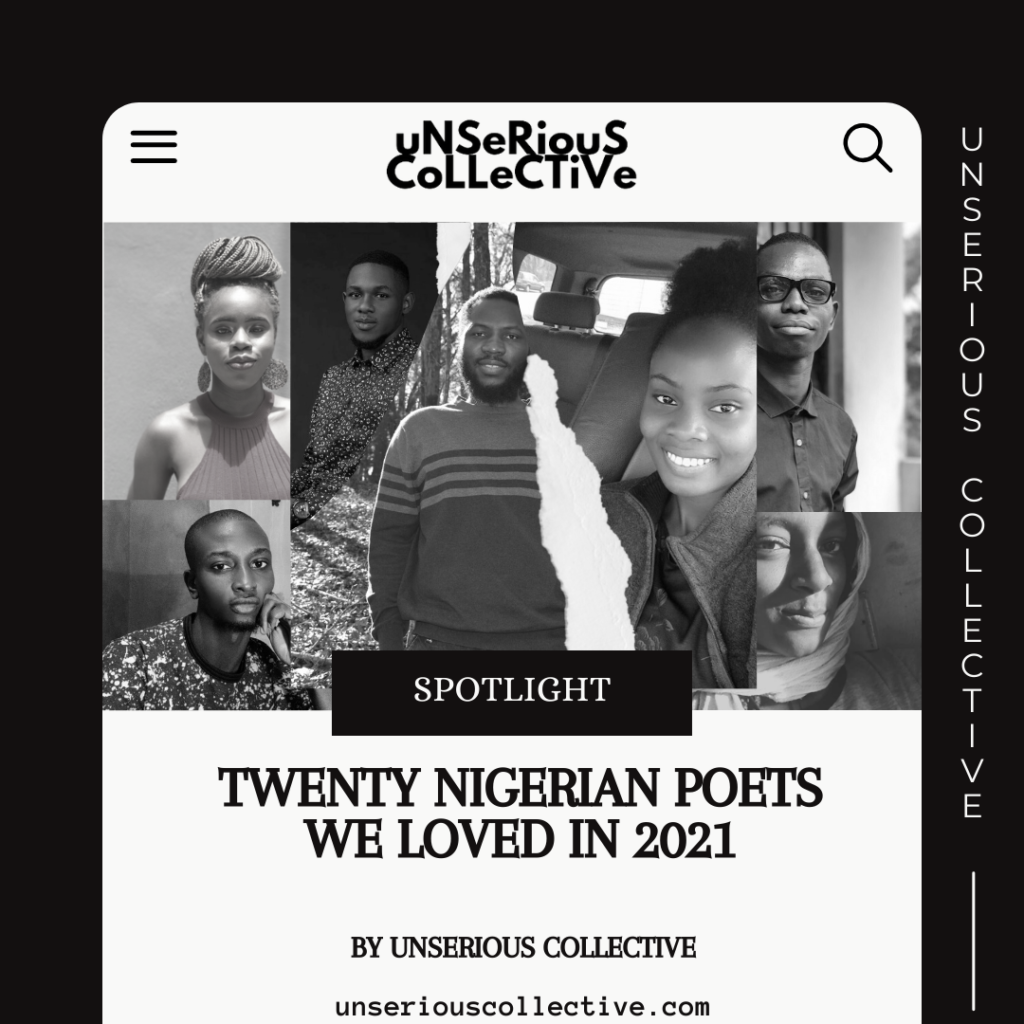 Mayowa, in this poem is writing after Inua Ellams and we can see the influence on his poem. In this poem, Mayowa is not only daunting, but he chooses the evocative way to drive home his story.

12. in telephone conversation with my father where he enquires about my marriage plans by Chisom Okafor (Beloit Poetry Journal)

The telephone has always been a toolbox where language rarefies through the meditative silence between words, between speech act and listening act. A process often, paradoxically, absented in regular conversations. Okafor’s poem follows the same tradition as in Soyinka’s Telephone Conversation and more aptly, for the obvious reasons, Sylvia Plath’s Daddy where speaker’s father’s “voices can’t just worm through”. In in telephone conversation with my father where he enquires about my marriage plans, the poet complicates this tradition — as a signal both to the generational gap, and assertion of identity — by relying on physical pauses, white spaces and caesura in the poem. Although evasive of the marriage question (through beautiful digressions), the poem does not turn its back on truth, the emotional truth; so that instead of engaging in an intellectual joust with the father as in Soyinka’s, the speaker wonders and wanders and ends the call with “i don’t think the telephone line is clear enough for this conversation.”

If you’re interested in a rich narrative poem, look in Nebeolisa’s direction. His “Good Times” walks us, conscious readers, through an event that wrecks us with compassion. The narrative is fluid and prosaic. Nebeolisa effortlessly tells a sad story of two lovers whose last experience together is, perhaps, the most passionate.

What astonishes about this poem is how deeply the knowledge of the poet shows from this poem. The writer briefs, in this poem, the relationship between death and the incarnation of the body. It’s even more powerful how the poet personifies the dead as a dancer, bringing into the poem the life of place. Brief, yet breathtaking!

The opening and closing lines of this poem describe in a swift symphony the mesmeric wonder of the poet’s diction. Invocatory, mythical, mystical — Betiku reaches into the spiritual here. Terrific!

Obasiota’s poem is one cloaked with bravery: the form, the imagery, the questions, the dialogue, and the vulnerability. We’ve been talking about the body of poems. Perhaps, for this poem, we’re thinking of its duende—its soul, its openness, and its power. This poem defines, in its own way, desire and love; invites us to witness the lover and the beloved—and in a way through witnessing, we feel the warmth of longing, though hemmed with restlessness. Obasiota shows us how a poem about love, desire, and longing can be filled with a fine restlessness.

A masterclass on artistic control. Undoubtedly, Joy Baby is in a conversation with Omotoyinbo’s poem, but is more elegiac in tone. The speaker laments “Name me nomad, christen me travelling speck of dust.” There is such a great wonder here as much as there is sorrow. But how can one write in the tired form that is elegy with such great control? Obuh reins in the melancholia bursting at the seams of each line by withholding a lot. The first being that we don’t know too much but know just enough, such that the dead child becomes a myth symbolon, indeterminable and unreal (thus un-tethered); but the grief is real like a shawl hiding the child. One possibility is the abiku child in J.P. Clark’s eponymous poem that the speaker hears “walking through the front door” in Obuh’s poem.

18. A Silence the Depth of Graves by Timi Sanni (Lolwe)

This is a poem we fancy for two major reasons — it is in conversation with the work of another contemporary poet (Ernest O. Ògúnyẹmí), and it explores grief in a manner that’s so peculiar to this generation of poets in Nigerian poetry. The exploration of personal trauma through verse is not altogether new, but Nigerian poets like Timi do make it new in their writing, style, cadence.

“In what room in my life
can I enter & feel warm, held close, beloved?”

This line from Ernest’s poem cries out and makes a plea. This poem is a reflection of how one’s life can be imperfect.

Adeyemi writes of joy in a multidimensional way: solemn joy; chaotic joy; joy as a dove in the chest; joy as an orchid growing out of darkness; and more. This poem gives wings to hope. Powerful!